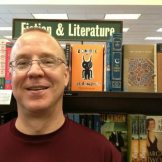 Spread the word and get involved —> take your most creative pictures of your copy of ZOMBIE and email no more than 3 to the following email address: zombiebarker AT gmail DOT com.

Your picture(s) can be a selfie holding your ZOMBIE or your ZOMBIE snuggled up next to a sleeping baby OR your ZOMBIE chillin’ at the laundromat OR a group shot of you and your friends all reading your own ZOMBIES OR something way more creative.

Truth-be-told, I cannot take credit for this #GotZombie Campaign. I must give whole credit to the dozen (or so) whipsmart early ZOMBIE readers who enjoyed the novel so much that they took some funny, some creepy, some crazy, some bizarre pictures of their ZOMBIE in a variety of situations and sent them to me as a token of their kindness. In turn, my response to their brilliant enthusiasm and blissful creativity was to create the #GotZombie Campaign —> a worldwide event where anyone with a camera or camera phone and access to email can get involved.

[To be clear, I am not asking folks to post their #GotZombie pictures to any social media sites anymore, but rather to simply email them to the address above, so that I can cage and contain them until the day comes when I release them all into the world together, like the good little army of undead that they are!]

I have received the most inspired #GotZombie pictures of late and trust me when I say that it’s KILLING me to keep them quiet until the #GotZombie Apocalypse ascends which according to some zombie experts is predicted to occur on Monday, July 8, 2013 which is only weeks away!

In addition, I have added an small incentive for you competitive-types out there: the person who submits the “best” [and by “best” I mean that I will not be judging, but will instead defer to my publisher Soho Press] #GotZombie picture will receive 1) an autographed copy of ZOMBIE with some silly personalized inscription; and 2) the very last of the promotional ZOMBIE key chain displayed below:

Now go take your ZOMBIE picture. [Be safe though.] Get crazy. Go wild. [Not too crazy or wild. I don’t want anyone getting hurt.] The only rule is that there are no rules. [But really there are rules. Nothing offensive, please. (I know what you are thinking: ‘Nothing offensive? And this coming from the dude who wrote ZOMBIE.)] Let your imagination flow. [But flow naturally, not chemically.] And send me your best #GotZombie pictures.