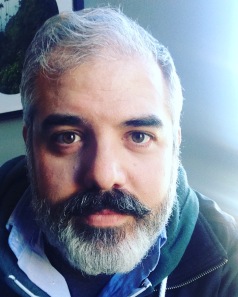 Joseph Ross Angelella is the author of the irreverent and twisted coming-of-age debut  Zombie: A Novel (Soho Press, 2012).

He holds an MFA in Creative Writing & Literature from the Bennington Writing Seminars at Bennington College. He teaches writing in both the English department at the University of Maryland, College Park and the Electronic Media & Film department at Towson University.

He lives in Baltimore with his wife, the novelist and editor Kate Angelella, and their dinosaur-obsessed son Geno. Find him on twitter: @jrangelella.